Postcard from the Field: The Brown Family 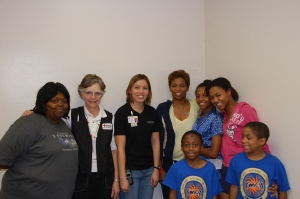 For the Brown family of Houston, Texas, this is their third time staying in a Red Cross shelter. They evacuated after Hurricanes Katrina, Rita and now Ike.

Cynthia Brown, her daughter Tamica, and Tamica’s four children are staying in a San Antonio shelter staffed by the Red Cross and other partner organizations.

The Browns were displaced from their Houston home for nine months during Hurricanes Katrina and Rita. The children attended seven schools during this period of time. Cynthia summed up their situation by saying, “Life is very precious. Things can always be replaced, but you only have that one life to live.”

This is the latest information for the Red Cross Hurricane Ike relief operation. These numbers are current as of September 13 at 8 am:

These photos are available for media distribution. Please click the photo for caption and courtesy information: