This photo is available for distribution. Please click the photo for caption and courtesy information: 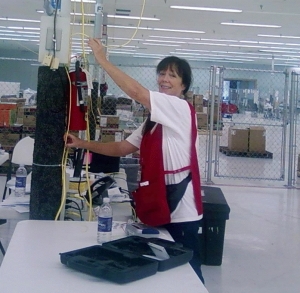 Saundra Romero, a Red Cross volunteer from the Oregon Pacific Chapter, appreciates how her co-workers pitch in and support her efforts. She wanted to help with this year’s hurricane response needs and only had one week of vacation at the time. Her co-workers at UMPQUA, a community development corporation, pitched in and through their generous donations, Saundra, received an extra 40 hours of vacation time.

“I think it’s wonderful that they stand behind me, especially since I’m their only tech person. This gives them an opportunity to support the Red Cross through me.”   Based in Baton Rouge, Louisiana at the Red Cross disaster relief headquarters, Saundra provides computer and phone support for other workers.

Saundra’s extended community has supported her in the past too. In 2005, the community of Roseburg, Oregon, came together and raised five weeks pay to support Saundra while she volunteered to assist victims of Hurricanes Katrina and Rita.

WASHINGTON, Wednesday, October 1, 2008 – A mere month has passed since Hurricane Gustav made landfall in the United States. For Louisiana and Texas residents, the cleanup has started, but time hasn’t lessened the need for food, shelter and emotional support.

Although Ike’s aftermath has largely been overshadowed by economic and political news, and many have written off Gustav as a “near miss,” both of these storms were a direct hit for the people of the Gulf Coast. The Red Cross has been there every step of the way, providing a staggering number of services to people whose homes were damaged or destroyed; to thousands who stayed in shelters; and to countless numbers that received hot meals when they were left without power.

Shelters remain open in Louisiana and Texas in what will be a lengthy relief operation on the Gulf Coast. To date:

In order to offset this year’s record number of disasters-including widespread tornadoes, flooding in the Midwest, an early wildfire season and, most recently, Dolly, Fay, Gustav, Hanna and Ike-the Red Cross has launched the Campaign for Disaster Relief. To date, generous Americans have supported the campaign with more than $30 million donated or pledged toward the ultimate goal of $100 million.